Home » Russia » A Guide to Russian Food – What to Eat in Russia
THIS POST MAY CONTAIN COMPENSATED AND AFFILIATE LINKS. MORE INFORMATION IN OUR DISCLAIMER

It wasn’t the most inspiring of countries as food goes.  Russian Food can be basic.  It can be tasty.  It can be strange – we tried it all.

Well, we’ve tried most things- well the list of Russian foods that you find on those searches on the internet – as to what you should try. Nige didn’t get his Beef Stroganov, but says he’s not too bothered as he’s had it before, just not in Russia.

Our first meal was at the very nice Zoom Cafe in St Petersburg. Lovely atmosphere, although we did feel like the poor relations in this place. I’m sure that you’re supposed to have more than just the main course, Nige’s fish and potato pie was good, and my “sauted potatoes”, while good, was also about 10 mouthfuls short of actually being a main course, but the layout and the restaurant is great, and there’s a heap of English there as well.

We ate in a lot (I’ll remind you of the budget of $50 a day per person…) – porridge for breakfast, as it was very cold when we first got there and a box lasted us the 6 days of the time in SPB. Deciphering the Russian porridge instructions on day two was interesting, although the group of young Russians managed to help us out in significantly more English than we had Russian. 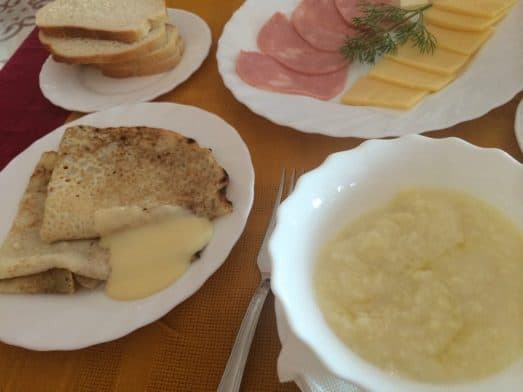 Breakfast in the main has been banana’s and bread, or yoghurt, apart from the fabulous breakfast at the Tsarevna Guest House in Rostov – tea or coffee, then a bowl of Russian buckwheat porridge (really quite tasty), two blini with a kind of creamy condensed milk and then two slices of bread, with ham and cheese as well. 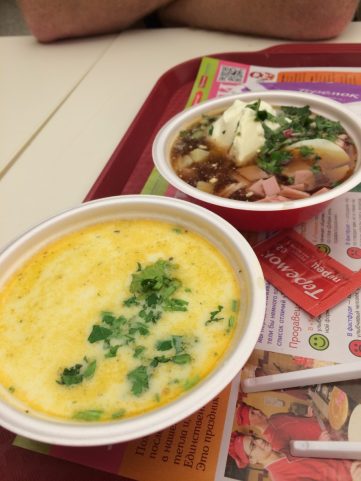 We’ve also eaten soup with cold, fizzy non-alcoholic beer (Kbaca) – the beer that you’d normally buy on the streets, poured on it and salmon and cream soup. We’ve had blini (pancakes) with salmon, with condensed milk, with ham and cheese.

In Suzdal we had fabulous Borscht followed by more blini at a local restaurant where the English ran to understanding that we wanted two more beers. We fell off the Russian wagon in Yaroslavl and had lasagne and pizza, but hotdogs were also on the menu a few times. Pasta, that good old staple of most travellers lives was beaten to death very quickly, when we bought ketchup instead of just plain tomato sauce. I have to say, it’s interesting, but not one we will be trying again. 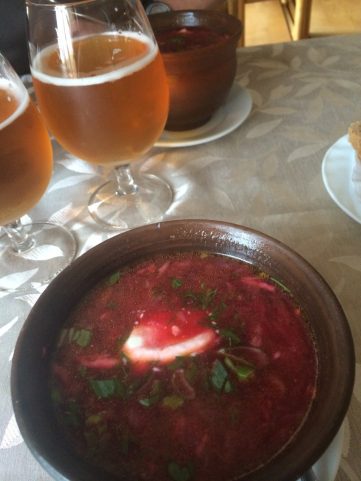 At the superb Nigaru restaurant in Ekaterinburg, we had amazing pelmeni and soup along with fresh bread – so good that I’m considering adding Uzbekistan to the list of places to visit on the basis of this bread alone. We’ve had flat bread, dark bread, azerbaijaian bread, sliced bread, dry bread and croutons masquerading as crisps.

We didn’t buy the Kbaca in the streets, but we did buy beer on tap from the local store and the wooden shack too. At $2.70 a litre it was an interesting foray into local life. 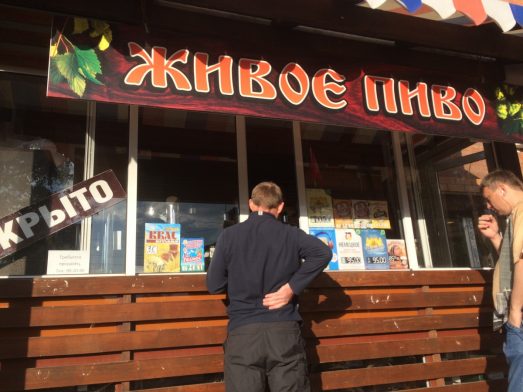 We snacked on smoked stringy cheese – known as a beer snack. 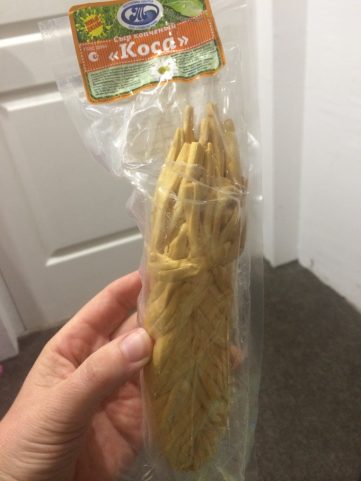 We stood in the rain on the street and ate freshly smoked Omul from the homemade smoker at the end of an old ladies garden in Listvyanka, the Lake Baikal version of street food. 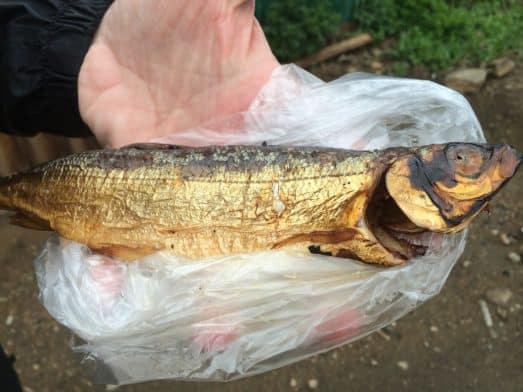 Then we loaded up that night with caviar on toast, frozen “sig” fish with spices (very very weird), omul and salmon kebab and finished off our fish-fest with onion and mushroom stuffed omul. 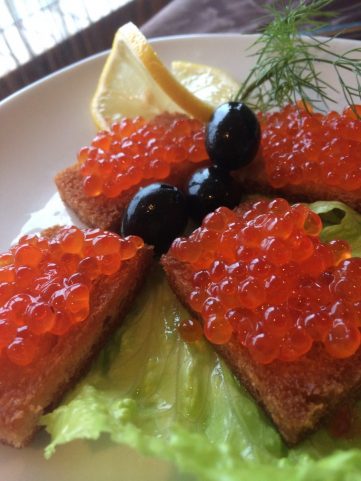 On the trains we did like the locals did. Boiled eggs, tomatoes, salami or ham and cheese (slices or the local version of dairylea triangles) with bread for the first day, then with no refrigeration, noodles and noodles and noodles. Noodle boredom occasionally avoided by the tubs of instant potato with un-named bits in, or cheese soup.

Picnic on the Train 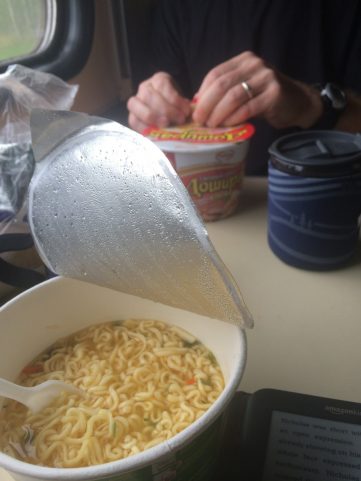 We drank lots of peppermint tea, on trains, in hostels (where some had these fab cold and HOT water dispensers). 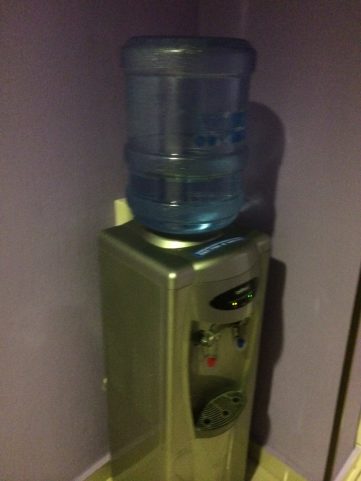 The best peppermint tea is the Sainsbury’s that we brought with us (thats a note to Diane and Graeme to bring a bagful to Ho Chi Minh city later in the year!) and the Milford mint green tea is just horrid. It’s all thinly veiled black tea and I think we are fast becoming converts. We tried the Russian Baltika beer and others, as well as the Ukrainian in Litsvyanka, but no vodka – although I suspect as we head into Mongolia, there will be a small bottle of Chinggis Gold with our name on it.

We tried, too Russian chocolate, which after a very sugar free month went down quickly. 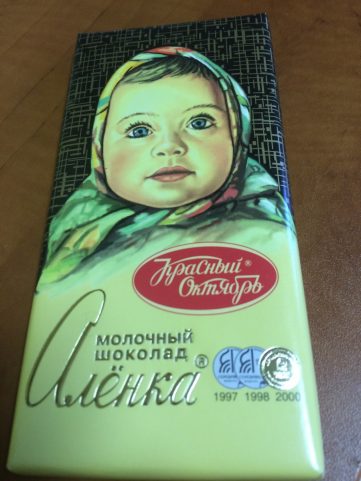 The Swiss chocolate industry can rest easy though, there’s no rival here anytime soon. And we had our obligatory ice-cream, after seeing virtually everyone else eating them, we wandered the streets of Irkutsk after spending our 12 rubles each to indulge, having had to resort to taking a photo of the specific ice-cream we wanted in order to buy it.

In the end, the food was interesting, we learned some things, liked some things, won’t try others again, but now it gets really interesting as head over the border to Mongolia where a land of mutton and fermented mares milk awaits us…