Eating the food of the country we’re traveling through is a hugely important element of how much we enjoy a country. While Indonesia hasn’t been my favorite country and there was nothing about the food that particularly jumped up and grabbed me, we did make our list, and eat our way through it.  This is our guide to Indonesian Food.

Similar to the rest of South East Asia, rice and noodles formed a huge backbone to the food we ate – and I LOVE rice and noodles. Plain steamed rice I particularly like. Noodle soup, heck yes. But when its ALL fried, I start to lose the will to live. When the flavoring is added by way of extremely hot sambal and I can’t actually taste anything, then I begin to wish I was somewhere else.

That said. We found some interesting surprises.

Eating in a Warung

To start with the basics, you eat mostly in a “warung” – that’s the Indonesian name for cafe or restaurant. The Warungs are mainly named after the owner. Many of the Westernized warungs will serve only specific dishes on the menu. More localized will have a serving stand that contains many dishes prepared earlier, where your meal will consist of a scoop of several of them and a scoop of rice.

Generally the food is served at room temperature. Piping hot doesn’t happen unless it’s come off a BBQ somewhere (or out of a pizza oven!).

And similarly to Malaysia we ate a lot of Nasi Goreng (Fried Rice).

There was also a lot of Mie Goreng (Fried Noodles) in my life too.

Indonesia is a Muslim country , so pork wasn’t on the menu for nearly a month and I really don’t like chicken, so it was primarily vegetarian fare – noodle and rice based.

Our instant noodles of choice continue to be Cup Noodles – which we first met in Japan when we visited their factory and the birthplace of instant noodles. Cup Noodles can be found in Indonesia with some local flavors, but IndoMie is the Indonesian brand of choice and gave us a few interesting “cook at home” meals.

Cheese and Indonesia have an abusive relationship. We’re clearly shopping in all the wrong stores as we didn’t find a single shop that stored cheese in the fridge. Not one. So cheese slices were either solidified and hard or so squishy you needed to lick them off the plastic wrapping. Normally I don’t have a problem with that, but squishy cheese when its 32 degrees outside isn’t my thing. Ever.

We had BBQ’d fish on Flores, but not prawns, as they got dropped on the floor. 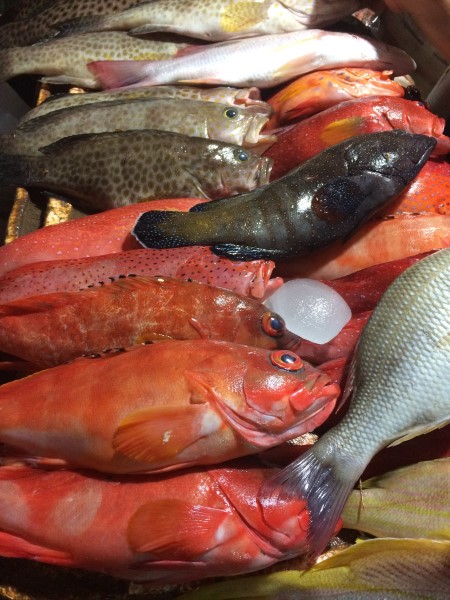 There were fabulous fish kebabs in the Gili Islands

And there were pancakes everywhere – including these, the heaviest in the world – on the Komodo Dragons trip with Kencana. 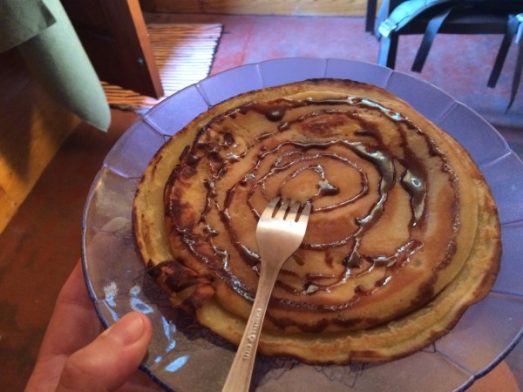 Now to the nice surprises..

Just when we were beginning to lose hope of eating anything without oil we found Gado-Gado. Not necessarily any healthier, but with significantly less oil. Depending on where you eat Gado-Gado, it’s slightly different. The base is either a plate of cooked vegetables (usually heavy on the cabbage with some carrots) or a plate of salad. Peanut sauce (not spicy, just plain) is then poured liberally over the dish of vegetables or salad. 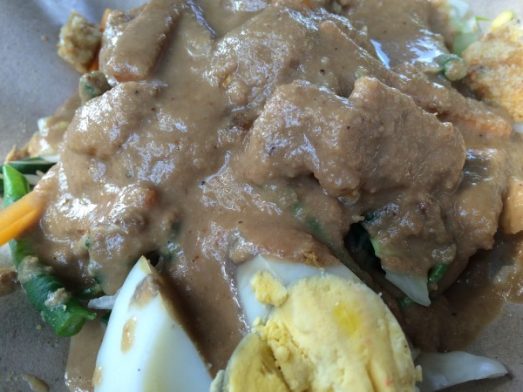 There’s usually a boiled egg involved and the Indonesian Krupuk (deep fried cracker) is crumbled over the top. Interesting in a way. 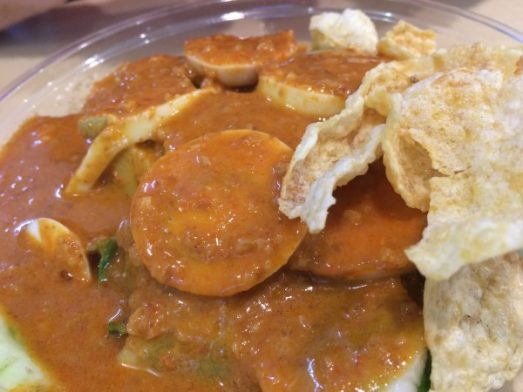 A speciality of Yogyakarta is Gudeg. Jackfruit curry. We’d had this for breakfast several times without realizing what it was! It’s served at room temperature – usually with steamed rice and a heap of other side dishes, which can include tempe, tofu, fried chicken and just really tastes like a low spice fruit or vegetable curry.

The unripe Jackfruit is boiled for hours with palm sugar and coconut milk with garlic, shallot, coriander, galangal and other spices.

We’d never had Tempe before. And sadly probably won’t have it again, but we will look for it. Tempe is “fermented soy bean” – which sounds disgusting, but marinate it in a good thick sauce or fry it and eat with dips and it’s a great vegetarian option. We first had tempe on the Komodo Island boat trip that we took and searched it out for lots of meals afterwards.

We also discovered how it was made on our Jalan Jalan around Yogyakarta towards the end of the Indonesian experience. Fried up with a little oil, garlic and chilli and it makes an excellent beer snack.

Bakso (sometimes Baso) is Indonesian meatball made from beef – very similar in texture to a Chinese beef, fish or pork ball – you know, those ones that you’re never really sure what they are, apart from not completely meat or vegetable..

Bakso is served in a bowl of broth (usually beef) with yellow noodles, rice vermicelli, vegetables, tofu, egg and bean sprouts. There are usually fried shallots sprinkled on top too and perhaps a crispy wonton. Usually places will offer a tofu only option (although the broth remains the same).

It’s spiced up by the addition of chili and sambal.  This was by far the hottest, spiciest soup we’ve eaten in 16 months on the road. And it was SOOO good.

We ate it on street corners, in plastic stool cafes and in the middle of the Tengger volcanic crater, served from the back of a motorbike after hiking up Bromo.

Indonesian coffee is much like Malaysian coffee. Firstly if you get the instant type then it’s “3-in-1” – a horrifying packet mix of coffee, creamer and sugar that coats the inside of your mouth with an oily, glutinous residue that you can feel digging cavities into your teeth.

The “freshly” ground type of coffee is ground to a powder. Literally. It’s ground so thin that it leaves a sludge in the bottom of each cup you get.

Because there’s no filter provided. And no matter how big the temptation is to go for that last mouthful, you WILL get skillful at avoiding it, because it’s almost as bad as the 3-in-1 residue, almost.

On our ill fated trip around Ubud, Bali, we stopped at a coffee “plantation” (clearly built just for us tourists), where we got to try Kopi Luwak or Civet Poo Coffee. Allegedly. At 50,000 IDR a cup, it’s pretty darned expensive. (five times the normal price).  And, no I couldn’t tell the difference between the regular coffee and the one that’s been pooped by a wild animal.

The digestive mechanism of the civet apparently improves the flavor of the coffee. It’s known as some of the most expensive coffee in the world – retailing in some places at US$700 a kilo. It’s also widely recognized that there is a lot of fraudulent coffee bearing its name.

The beer of choice in Indonesia is Bintang. Served usually very cold, in large 640ml bottles it was much the same as any other cold beer in South East Asia.

Not strong tasting, not a bad bottle to be had and the first always goes down extremely quickly.

What we did get to try was an avocado shake, dribbled liberally with chocolate, that tasted wonderful, but which I could feel putting inches on my hips.

And then there was Salak. It’s also known as snakeskin fruit, it’s a strange fruit.

Almost like a mix between an apple and a walnut with a slightly sour taste.

So, that was food in Indonesia. Oily, uninspiring, but with a few pleasant surprises.

When we travelled there was very little online booking available for buses, trains and ferries in Indonesia and South East Asia – the folks at Easybook have now remedied that – check timetables and book tickets online now – its WAY easier!