Welcome to another love affair with the food of the country. And this one started when we got on the train from Colombo Fort to Jaffna. Perhaps it was a momentary blip with our usual rules of playing it safe, but there was no waiting a few days until our stomachs settled into a new food style before we attempted the street food of the locale. Here, we dived straight into Sri Lankan food.

Perhaps it was more likely getting off a 5am flight, after spending our wedding anniversary overnight on chairs in Mumbai airport, then jumping on a train with no previous thought to food.

This then was breakfast. It’s what Sri Lankans call short eats – a variety of snacks that are bought and eaten by the dozen from short eat shops and restaurants. They’re mainly eaten on the move, for breakfast or as snacks in the evening.

Main short eats for us were fish or vegetable rolls

Roti (flat bread) wrapped around vegetable curry, folded into a triangle and then baked.

Vadai – which we munched on throughout our month in the country – a combination of lentils, onions, curry leaves and chilli, shaped and looking like a doughnut and then fried.

There were also corn and lentil cakes, fried to be crispy on the outside, and (sometimes) moist on the inside.

In Sri Lanka Eat in Hotels

In Sri Lanka we ate in hotels a lot. Because in Sri Lanka, a hotel is actually a restaurant or a cafe, apart from when it’s an actual hotel, or when it’s a hotel with a hotel that’s a restaurant attached. It makes finding reviews for where to eat (or stay) somewhat difficult.

The National Dish of Sri Lanka

The national dish of Sri Lanka is Rice and Curry. And we did eat Rice and Curry at least once a day while we were there, sometimes twice a day and on momentous days, three times a day. I am salivating just writing about it. It’s like no other rice and curry that I’ve eaten. And mostly the rice and curry is endless. You get to the point of not daring to finish a dish, because another one will appear – well either that or you polish off the second dish as well.

Sri Lankan food is to get fat for.

The curry that you eat isn’t a single dish. It’s usually a minimum of three, sometimes up to ten dishes, served usually with a big platter of rice.

As the western visitor you’ll get your curries served in individual dishes and can spoon it onto your own plate. Go local and it all arrives on a single plate. Take a rice and curry from a vendor on a train and it arrives wrapped in newspaper.

Most of the rice and curry is vegetable. And it’s whatever vegetable is available from the stalls or gardens round about. The staple though is dhal- or lentil curry.

Simple to make and containing red lentils, chili powder, curry powder, turmeric, dill seeds and a little cinnamon along with curry leaf, garlic and red onion, dhal is finished with a little salt (or a lot depending on your taste) and coconut milk. And that’s pretty much the recipe for all the curries we ate, with varying degrees of spice.

Sri Lankans will make curry out of everything. Aubergine (called Brinjal here, or Eggplant) once my most hated vegetable became a melt in the mouth dish that needed topping up when I emptied it.

There was cabbage curry.

Eating rice and curry is an art. The “correct” way to eat it is to mush it all up together, crumble the provided pappadom on top of it and scoop it up in your fingers.

Mainly, though, I preferred to enjoy the individual tastes and a spoon.

What was different about rice and curry (whether it was for breakfast, lunch or dinner) was that it was mostly served cold. Now, don’t go screwing your face up at that. It was really good. The heat of the curry came in its spices. And actually, eating it at best tepid was actually very, very good.

You’ll hear the kottu restaurant long before you see it. Kottu is essentially flaky roti bread cooked up with chopped up vegetables. (there are meat versions too) Sometimes with egg, sometimes with cheese.

During the cooking, the cook uses metal utensils to cut up the vegetables. Sometime much more so than others. That’s metal utensils onto a metal cooking tray. Yep. It’s a distinctive noise.

And yes it drives you nuts when you’re sat next to it (mental note: If you’re eating where kottu is available, don’t sit next to the cook!).

The best kottu we had was in Jaffna, in the Northern Province, at the Mango Hotel. One regular and one with cheese. Sometimes the cheese is grated and mixed in.

Sometimes it’s grated and stuck on top. Sometimes its three or four globs of cheese like primula hiding in the mush, just waiting for you to find them.

It was here in Sri Lanka that I ate my first dosa. Much of the cuisine of the northern part of Sri Lanka is influenced by South Indian foods – it was the Tamils of south India who Sir Thomas Lipton brought over to aid in his quest to take over the tea industry and they brought their culture and food with them too.

Again rice based, fried and stuffed with potato masala, my biggest worry was how to eat it. Messily and with my hands was the answer.

My second dosa made me feel as though I’d died and gone to heaven. This ghee masala dosa was nirvana in a few bites. It might of course have been the amount of saturated fat running through my veins that made me feel that though…

Outside of the main tourist areas (and even in them), it’s not easy to get a beer or alcohol in Sri Lanka. There are bars and restaurants designed for westerners of course, there are bars that are mainly for Sri Lankans (and there are rarely if ever women in them – and those women would be westerners or visitors).

Lion Beer is the beer of choice

There are dry days too. Poya Days – religious days when it’s forbidden to sell alcohol (and to display and sell meat) – there will always be the place willing to sell you an “apple juice” or a “special tea”, but one or two dry days a month doesn’t seem too difficult to stick to!

If you’re prepared to join the line, you can pick up beer and other drinks from the wine and beer shops. You’ll spot them from the lines forming outside of them from mid afternoon onwards – especially busy after 7pm, the line gets a little frantic towards closing time at 9pm. The cold beer usually runs out by 730pm, so unless you have a fridge, suck it up and wait until tomorrow.

Ginger Beer
Or, take the alternative, Ginger Beer, which you’ll find pretty much everywhere. Served in brown glass bottles with a straw, this will take you back to your childhood.

The Lion brand bottles are the weakest, but there are some great strong tasting – real ginger – beers that will refresh you and keep your system cleansed.

Coconuts
Pretty much everywhere you’ll find coconuts, where for 50 LKR someone will lop off the top with a machete, give you a straw and then chop the coconut open for you to enjoy the FRUIT?

What you should also try is wood apple juice.

Looking pretty much like an old worn out cricket ball, once they’re squished down into a juice, it’s a moorish, delightful drink that has (allegedly) cooling properties and is great in the heat of the day.

Tea
Clearly you can’t talk about drinking in Sri Lanka and not talk about tea. Ceylon tea is not only world famous, but is renowned for bringing tea to the masses in the late 1800’s, when Sir Thomas Lipton cut the supply times and costs of Chinese tea, to enable the working class to be able to afford the national drink of England.

Served in white porcelain tea pots with cups and saucers, after months of tea bags and cheap black tea, this was a little drop of luxury at rock bottom prices.

Breakfast
It’s certainly possible to have western breakfast in Sri Lanka, but my view is that it’s a waste of a good rice and curry opportunity.

There are a variety of dishes provided as standard for breakfast in Sri Lanka – but you have to make sure that you order the night before, so that they can be prepared. They’re all derivatives of rice and curry.

My favorite has to be string hoppers, which look like white vermicelli and are made from fermented rice flour. They’re soft, rice flour noodles and curly. By themselves they’re plain – imagine eating pulverized rice that has been reformed (stay with me) – its that simple a taste.

But they’re not served alone. You’ll also get a dish of coconut sambal with it. Its coconut, and onion and chilli. And a whole lot of oooooohhhhh – in a great way.

Also served with string hoppers is dhal. And this has to be the staple of the rice and curry in Sri Lanka. If we ate dhal 40 times during our time in Sri Lanka, then we had 40 different versions of it. One was definitely too salty, others were drier, some were more watery but 95% of the time, they were superb. Just enough liquid to soak into the hoppers and bind them together a little. Just enough heat and spice to make your mouth water. More than enough taste to ensure that you wanted it again for breakfast tomorrow. Or perhaps for lunch. And dinner. 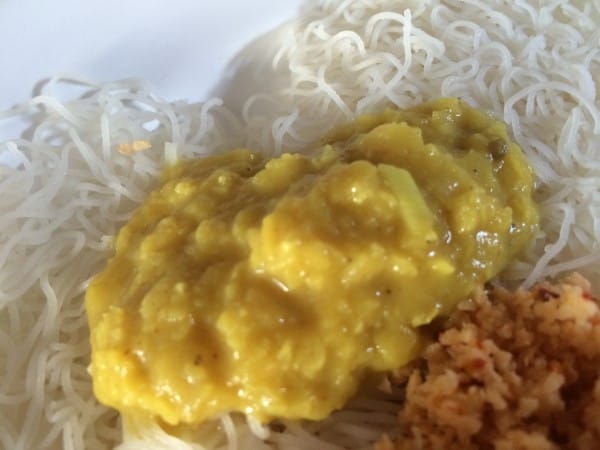 And that was our simple breakfast.

Unless of course it was hoppers.

Similar to the string hoppers, hoppers are a rice based pancake fried in a small pan – plain hoppers will come with dhal and coconut sambal, but what you really, really want are the egg hoppers. Where an egg is cracked into the bottom while the hopper is cooking and becomes part of it. And a little relish of course.

An alternative to the hoppers was yet another rice dish. Kiribath or Milk Rice – rice cooked and then soaked in coconut milk, flattened and left to stand until it solidified (I’m simplifying the process of course), it’s often served with jaggery (palm sugar) sprinkled on top.

In our month in Sri Lanka we ate Rice and Curry at least once a day, often three times a day. Most often, though it was twice. And now I’m no longer there, I miss it. It’s a good job that we’re in India continuing on the curry front!

I didn’t get bored of Rice and Curry once. Mainly I wondered how on earth I’m going to convince the family when we return to the UK to have string hoppers and dhal for breakfast..