We are here in Gwalior for one reason and that’s to visit Gwalior Fort.  There is something magical about Hill Forts in India, especially so, this fort in Gwalior.  If you think forts, you think impregnable.  A hill fort should have steep cliffs.  A fort should have a commanding aspect over the countryside.  Ideally it should be isolated (if nothing else it makes for better protection, and, of course, great photos!.)  Gwalior Fort delivers on all of that and more.  The Pearl of Indian Fortresses is somehow isolated despite being just above the city of Gwalior, India.  She is also colourful and stunningly beautiful too, perhaps the most beautiful fort in India.

This isn’t on the beaten track by any stretch of the imagination.  We’ll be the only western tourists that we’ll see in our entire visit to Gwalior, but this most magical of Indian Hill Forts is well worth the trip.

The Mughul emperor Babur described Gwalior Fort as the Pearl of India’s Fortresses, and she is truly gorgeous, welcome to our Gwalior Fort Guide.

We arrived on a train last night and quite safely walked the 15 minute hike in the dark to our hotel, the Vinayak.  This, at 1803 INR for a single night was one of our more expensive in India, but, oh so worth it.  The internet was the fastest we’ve experienced in India.  The room was huge the shower fabulous and the towels, big, white and fluffy.  When we came to leave (we only stayed one night), the staff offered us the use of a room and a shower to freshen up before our onward journey.  Why not book yourself a room there if you’re visiting Gwalior Fort?

The history of Gwalior Fort India goes back a long way.  The earliest record of the fort is 525 AD, although the fort proper is thought to have been built in the 8th century.  Legend has it that a local chief was on a hunting trip.  A hermit known as Gwalipa gave the chief water which healed leprosy.  In thanks, the chief founded Gwalior and named it after the hermit. The name Gwalior comes from the Hindi for “saint”.

The fort is built on sandstone on a 3km long plateau overlooking the city of Gwalior.   The fort has seen the rise and fall of several dynasties.

The first and most important thing to understand about Gwalior Fort in India is that it actually comprises a number of palaces and temples on the huge expanse, all enclosed by mostly intact walls.  This is far more than a fort in its truest sense.

Each of the palaces and temples commands a separate entrance fee, although a combined ticket is available to some areas (more on this shortly).  However, much of the land is occupied by the private Scindia School, which was established in 1897 for the education of the Indian nobility.

There are two potential entrances to the fort, one from the west and one from the east.  It’s possible to be driven, or drive up to the west entrance.  To enter via the east, one must hike up, as no vehicles are allowed.  When I said I wanted to experience Gwalior Fort, I meant it, so we hiked up to the Eastern wall entrance. And it is magical.

This route up the Eastern Approach takes you through a series of 5 gates.  There were two originally two further gates but they have disappeared.

Take a Trip to Gwalior from Agra

This is known as the Gwalior Gate.  We left early-ish, from the Vinayak Hotel, before the heat of the day hit, taking an auto ricksaw to the Gwalior Gate.  The road might be steep and if you walk without stopping it will take 15 minutes.   Of course it wasn’t possible for us to walk up without stopping.  Walking up under the walls is quite simply breath taking.  The views are stunning.

Seeing the fort from a distance, and then getting closer and imagining what this might have been like centuries ago.  It is truly stunning.    There is no better way to get an introduction to the fort and beginning to comprehend its stunning scale and beauty.

We walked through the Gwalior Gate, passing the first Gwalior State Archaeology Museum, which opens from 10am until 5pm.

There are several temples on the way up, including one small one where the world’s first mention of zero is found.  That’s right.  Indian mathematicians were the first to invent the circle that we know as zero.

You can read more about that on the Smithsonian website, but we must continue up the hill. All the while the immense size of the fort becomes ever apparent and our insignificance increases.

This route from the Eastern Gate of Gwalior up to the fort passes through seven gates (although two are missing) , the last of which is the Hathi Pol, or the Elephant Gate.

Sadly the life-sized statue of the elephant after which it was named is no longer here.    It becomes apparent as we approach the Elephant Gate into the fort itself why Gwalior Fort is described as the pearl of Indian forts    The coloured friezes that we see adorning the walls are simply stunning. 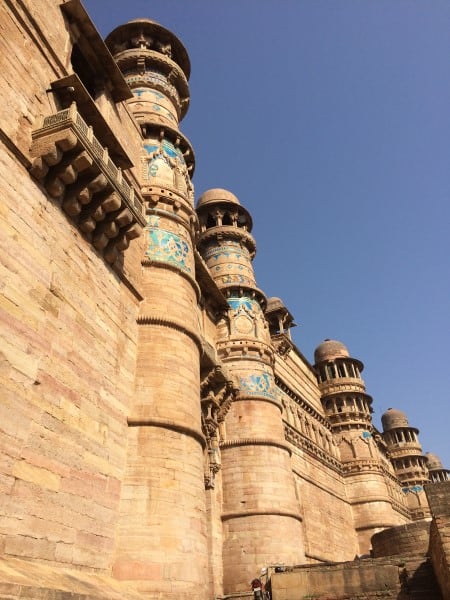 Directly ahead of us is the small Gwalior Archaeology museum, sometimes referred to as the Gwalior fort museum.

To our right and owner of the gorgeous panel of blue, yellow and green tiles of ducks, elephants and tigers is the Man Singh Palace, Gwalior.

Now that we’re here at the top, we find the ticket office for the Man Singh Palace.  It’s up on our left, slightly further ahead.  Our tickets cost 100 INR for Foreigners, whereas its 5 INR for Indians.  Unusually there’s no charge for photography.

The entrance to this palace is directly behind us as we buy the tickets.

It’s something of a labyrinth, there are two floors “underground” and the level you go in on is as high as you can get as of February 2015.  There’s beautiful stone carvings in the pillars and ceilings throughout and views down to the city below.    Guides are available if you want them.  Don’t worry, they’ll find you.

The ticket that we buy for the Man Singh Palace also gets us into the Mother-in-Law / Daughter-in-Law (Sas Bahu temple), so you need to hold onto it.  We, however, weren’t asked to show it anywhere else.

The Man Singh Palace is also known as the Painted Palace, or the Chit Mandir.   It was built by Man Singh himself between 1486 and 1516 and has two open courts in early Hindi design.  The lower levels are for hot weather and are connected via speaking tubes which are built into the walls.  Try them.  Its fun.

There are SEVEN other state monuments here at the top that you need a ticket to access and the ticket office and entrance to them is just outside the entrance to the Man Singh Palace.  Tickets are 250 INR for Foreigners and 10 for Indians.   There’s a 25 INR fee for photography.

There is little signage in this area, but the monuments are worth wandering around – for the architecture and the views that you’ll get along the cliff line and over the surrounding lower level areas.   This area is really quite extensive.  Again pretty labyrinth like, some areas will need a torch and you’ll need to watch your step on some of the stairs. 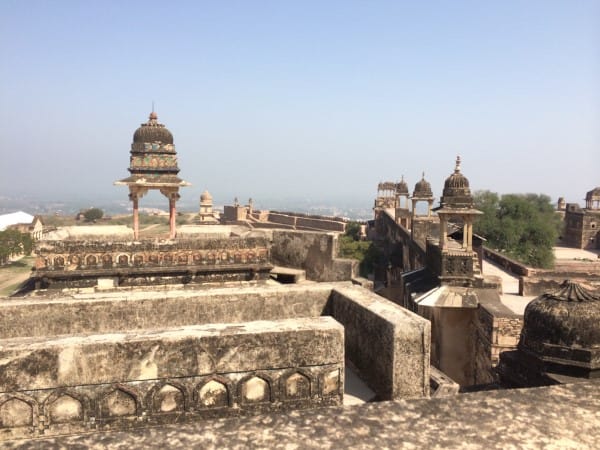 The archaeology museum, the one here at the top, not the State one at the bottom, is a bargain at 5 INR regardless of your nationality, although no photos are allowed. The building used to be a hospital while the British held it.

There’s a display both in the garden and inside the building.  Signage is good and explanatory and there is a good collection of artifacts from around the region.  It doesn’t seem to have anything to do with Gwalior fort though, so if you’re short on time, you won’t miss much by missing it out.

Leaving these palaces and temples behind the rest of the Fort area is still vast.

We stopped at the small cafe to sit in the shade, grab a drink and some snacks.  Here you can also rent cycles, which cost 50 INR for two hours, plus a 500 INR security deposit.  There’s also a number of roadside stalls.    This is also where you can buy your tickets for the sound and light show that runs on an evening in Hindi and English.

We walked.  C’mon you know we try and walk everywhere by now, right?  The fort sits on a 3km long escarpment, and we were generally going in a single direction, so it’s easily walkable.

The left fork after the cafe leads to the Sas Bahu temple – about 1km, take the first left turn also.  Its well worth a look as the ticket for Man Singh includes it and the carving and stonework is stunning.  This is the Mother and Daughter in Law Temple and has some more spectacular views of the surrounds.

We continue along the road and take a right, the “no entry” road goes straight ahead and we skirt around the Scindia school grounds, then we come to the Teli Ka Mandir temple.  It is quite is beautiful on the outside and empty and stinky on the inside.

We leave the Sikh Gurdwara Temple on our right and keep moving.

It takes us just a few more minute to get the road down to the Urvai or West Gate.  This is where most of the folks who have come here arrive, as it’s the road that you can drive in.   You can get an autorickshaw from town to here for a rew rupees.  If you get dropped off here, then you’ll still want to walk, because the Jain Statues are amazing.  On the way down Gwalior Fort isn’t done yet in wowing you.

It’s a steep walk down, but there’s little traffic and it takes us perhaps 30 minutes to reach the West Gate, including the time we spend gawping at the Jain Statues en route. The fabulous Jain statues and carvings that you see, first of all on the left and then on the right are well worth it.  The first set of carvings you’ll see on the left are in much better condition.

Most of these statues were carved into the cliff face in the 15th century and are the nude figures of the 24 Jain teachers (the tirthankars).  Many were defaced in 1527, but some have been repaired.

From the Urvai Gate we take a 100 INR auto rickshaw to the Jai Vilas Palace, another one of the stunning places to visit in Gwalior.  You can read our review about the staggeringly expensive and somewhat bizarre Jai Vilas Palace on Tripadvisor.

How long to visit Gwalior Fort?

We’d arrived at the Gwalior Gate at 0915 and were getting in an auto at 1415 having spent a very leisurely few hours enjoying what was mostly a solitary visit to this stunning fort.

Gwalior Fort, truly is a pearl among the Indian Hill Forts.  It doesn’t receive many visitors and for that is all the better in my opinion.  That it’s so close to the city (and a train station with decent connections) makes it easy to visit if you’re so inclined.

We highly recommend the Vinayak Hotel and their friendly staff and you MUST stop by the Indian Coffee House en route back to the station, their egg curry for 60 INR is another reason to visit Gwalior!