It’s March 8th, 2015.  We’re on the train, two miles outside of Vadodara, Gujarat, India.  We were scheduled to arrive on time.  Unless you’ve been on an Indian train you won’t understand our excitement at this.  But as I said.  That was two miles out.  We inched in 25 minutes late and arrived in our latest new state.  Gujarat.

Known for it’s Asiatic lions, vegetarian food and the fact that it’s a dry state we’d arrived in Vadodara, where we’d be staying for two nights.  Two nights of comparative luxury.  The award miles and points are starting to expire,  so we’ll have the benefit of 24 hour hot water, unstained towels, a fridge in the room and all those luxuries that we’ve come to describe as “only available in REAL hotel rooms”.

First stop, though, after the cloakroom (left luggage here in India) at the station was breakfast and the best aloo paratha to date.  That I would eat what I’d previously consider “curry” for breakfast each day would have been so foreign to me 10 months ago.  Now, I positively look forward to it and am somewhat disappointed if I’m offered toast on a morning.

Getting to Laxmi Vilas Palace from Vadodara

Now, a 3 kilometer hike to our first stop.  The Laxmi Vilas Palace, home of the current Royal Family of Vadodara and a glorious haven of peace here in Gujarat.  Vadodara as a whole is pretty quiet.  While there are lots of auto-rickshaw drivers at the station, only a couple ask us where we want to go.  And they take no for an answer pretty quickly.   This is nice.  I could get used to it!.

It could of course be because English is much less used here.  We see very little signage in English, mostly Gujarati, but there are no – yes zero – male Indian stares.  A policeman says hello as we cross the road.  I look around suspiciously before I realize he’s just being nice.  Another traffic cop stops the traffic for us, so we can cross a different road.  I must have clicked my Ruby Slippers, because clearly I’m in Oz.

Thirty minutes later we arrive at Laxmi Vilas, having signed in at security and bought our 170 INR tickets – which include an audio tour, which you can also download off the web.

I am DEFINITELY in Oz.  After the rip off audio prices of Jaipur this is so nice. (no need to use our Audio Guide Budget Hack here)

And so is the Palace.

And the audio tour is great.

The staff are friendly.  So long as you’re not walking on the wrong bit of grass and they’re whistling at you.  Or yelling if you try and take photos inside the palace.  (it’s funny to watch other tourists try and work slightly outside the rules and the results).

The palace was built in 1890, famously its architect killed himself before completion as he was convinced that he’d miscalculated and that the foundations wouldn’t hold the building.  (they did).

And it’s quiet here.  We’ve seen maybe 20 other people – two westerners, all others are Indian tourists.  All this place needs is a nice little cafe, nestling under the tress, serving a good pot of Darjeeling Tea and I’d never move again.

Still, we have to move on.  We’re going in search of Tambekar Wada – a traditional wooden house with a couple of rooms that have paintings.  I say going in search, because most of the TripAdvisor reviews say “it’s pretty hard to find” – but then no details of how to find it (a new pet hate) and one review that someone wrote of the wrong place.

It ends up being a walk down some of the back streets of Vadodara.  We find the red brick Clock Tower.

And then, almost giving up and heading back to the station, we spot her just out of the corner of our eye.

Yet we’re still not sure.  There is a sign from the Archaeological Survey of India, but it’s not particularly legible.

How to Find Tambekar Wada, Vadodara

The gate looks bolted, but we head on through and find the caretaker.  She’s an older Indian woman, with little to no English and she waves us to follow her.

Tambekar was the house of a wealthy merchant and it’s been preserved in this state of decay for some time now.  It looks nothing from the outside, even the ASI sign has seen better days, but follow the caretaker up the stairs to the first and second floor and it’s a treasure trove of old glories.

You’ll want your camera out from the first – even the old shutters are crying out to get captured for posterity.

Tambekar Wada is a three-storeyed building – a typical Maratha Mansion, it was once the residence of Bhau Tambekar the State Minister. The paintings inside are around 140 years old.

We take shots of where the building is – and post them up to TripAdvisor – while the guest book that we sign indicates that around 6 people a month get to visit, I imagine there’s a host more that never even find the place! 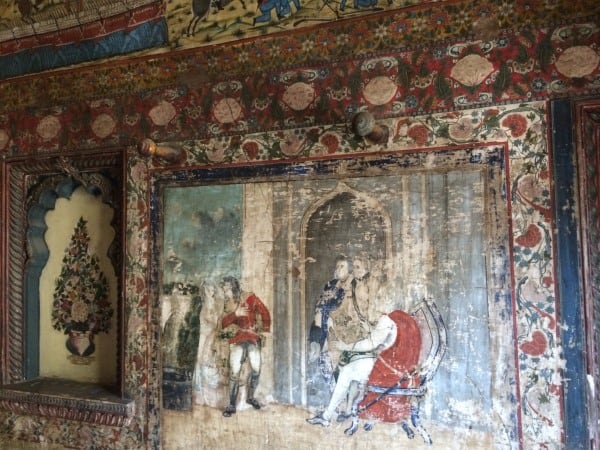 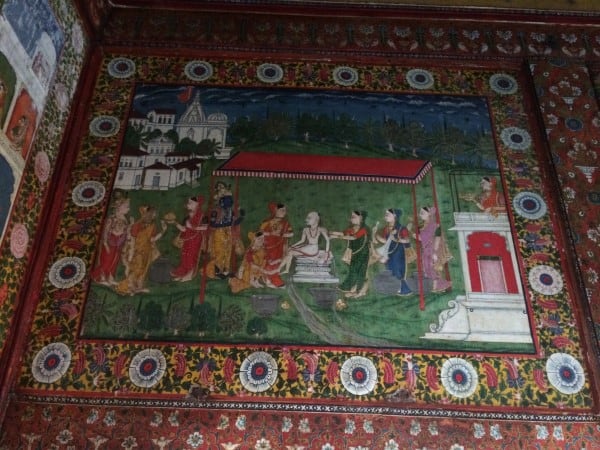 And then, we’re done, back to the hotel and a Gujarati Thali – which is the best damned thali we’ve had in our current 3 months in India.  Heaven.

This website uses cookies to improve your experience while you navigate through the website. Out of these, the cookies that are categorized as necessary are stored on your browser as they are essential for the working of basic functionalities of the website. We also use third-party cookies that help us analyze and understand how you use this website. These cookies will be stored in your browser only with your consent. You also have the option to opt-out of these cookies. But opting out of some of these cookies may affect your browsing experience.
Necessary Always Enabled

Performance cookies are used to understand and analyze the key performance indexes of the website which helps in delivering a better user experience for the visitors.

Analytical cookies are used to understand how visitors interact with the website. These cookies help provide information on metrics the number of visitors, bounce rate, traffic source, etc.

Advertisement cookies are used to provide visitors with relevant ads and marketing campaigns. These cookies track visitors across websites and collect information to provide customized ads.

Other uncategorized cookies are those that are being analyzed and have not been classified into a category as yet.