Yes.  I know.  Who knew eh?   Wine Tasting India.  Not necessarily what you’d expect to hear in the same sentence, but here we are.  We tasted wine at Inle Lake, in Myanmar and as we’re en route from the Ajanta Caves to Mumbai we’re taking a short stopover in the Nashik area of Maharashtra.

We left Aurangabad on a train at 0600 this morning after our marathon trip from Kathmandu and our superb visit to the Ajanta and Ellora Caves.  The Hotel Preetam was a deliberate choice, as it’s literally metres from the Aurangabad Railway Station.

It will take us just under three hours to get to Nashik, where we will find an auto or a taxi to take us wine tasting.  We have a train booked from Nashik to Mumbai at 1625 today.  It will be a short visit!

The History of Indian Wine

There’s not much known about wine in India until the Portuguese landed in Goa and introduced the concept of port wine.  It has been suggested that viticulture was introduced by the Persians as early as 2500 BC, but there are few, if any details available.

The Main Wine Areas of India

There are 8 main wine areas in India.  These are Champhai, Goa, Himachal, Kashmir (although grapes are grown, there’s no wine production here yet), Himachal, Kaveri Hills, Nandhi Hills and the Deccan Plateau.  We drove through the Nandi Hills, near Bengalaru, back in February, but didn’t stop.

We are in the northern reaches of the Deccan Plateau and the main area, Nashik, is known as the wine capital of India. 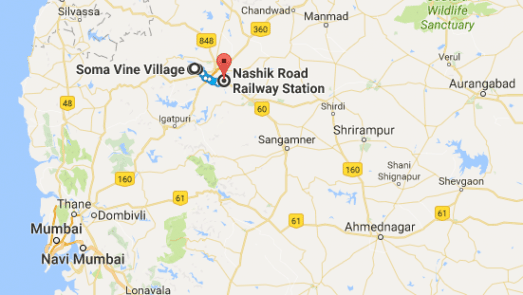 There are seven wineries where it’s possible to visit and taste wine here in the Nashik area.  The primary challenge is transport as some are a reasonable distance from Nashik town.  The wineries in this area are:

How to Go from Nashik Town to Nashik Wineries

We arrive at the railway station in Nashik and grab a dosa masala for breakfast.  It seems wrong to wine taste on an empty stomach. 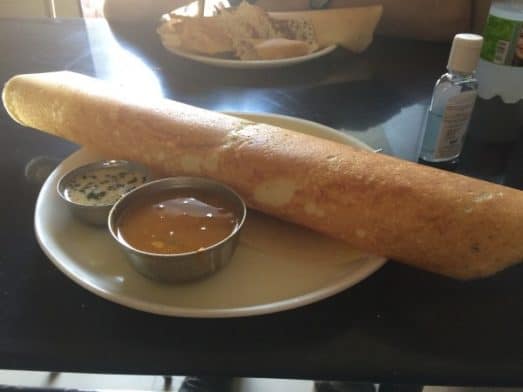 Besides it’s not quite 9am when we arrive, which seems too early also!   Our options for transport should be either an auto or a taxi, however they’re limited to who can understand us.   In the end we find an auto driver who agrees to take us to the wineries for 500 INR.  We think it’s a great deal, he seems to think it’s a great deal.  We’re all happy, but more on that later. 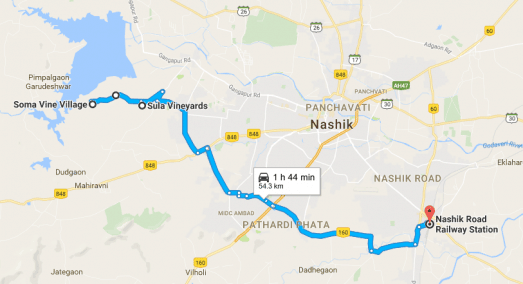 We’ll go to Sula Vineyards first, then head over to York Winery and finally take in Soma Vineyards before coming back for our train to Mumbai.

Each of the wineries that we’ve chosen has a tasting room and two of them have tours.

How to Visit Sula Vineyards Nashik

It takes around an hour to get here from the Nashik Road Railway station, but the roads weren’t too busy.  There’s a tasting and small tour on offer here for the price of 250 INR.  This gives you the short tour and a guided tasting of 6 wines.

It’s a very professional looking operation, although if you’ve been wine tasting in the USA, New Zealand, Australia or Europe you may find it a little basic. We were the only foreign tourists here, and the tasting and tour was delivered in excellent English.   It’s a lovely setting, and you could almost be in Napa.  Almost. 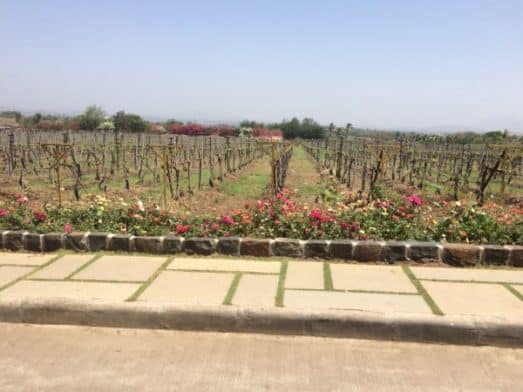 Sula is India’s most famous winery.  It started in 1999 and takes a 70% market share in India.  There’s even a festival here in February each year and a one day wine appreciation course.  Our tour and tasting took us around 70 minutes, by which time our auto driver was getting somewhat agitated and threatening to leave us (we had NOT paid him at this point).  The staff at Sula helped us to renegotiate.

The reason we thought we had such a good deal was that he didn’t realize what he was getting into.  Ten minutes later and we’d agreed that he would take us to the other two wineries and yes, wait for us while we tasted, then take us back to Nashik Railway Station for 1,000 INR in total.  He was concerned, he said that he had to pick his daughter up from school, that’s why he wanted to leave us.  The increase to 1000 INR (US$15, GBP11.30) helped him to find alternative arrangements.

Sula wine is most definitely targeted at the much sweeter tooth of the Indian market.  If you like sweeter wine, then you’ll like this. 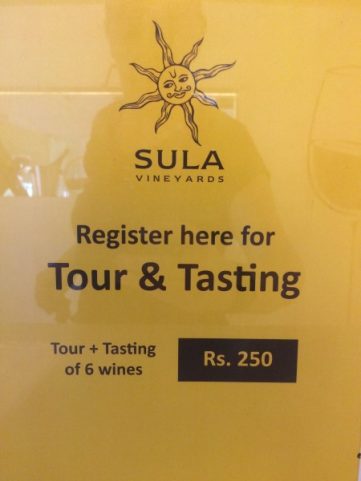 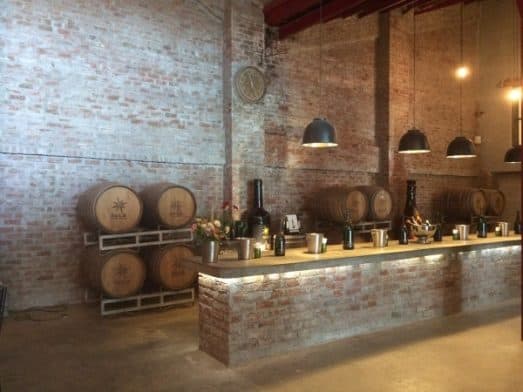 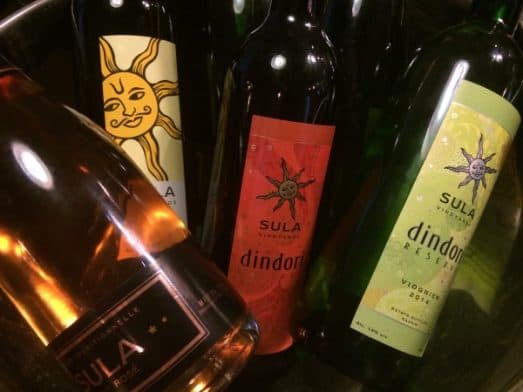 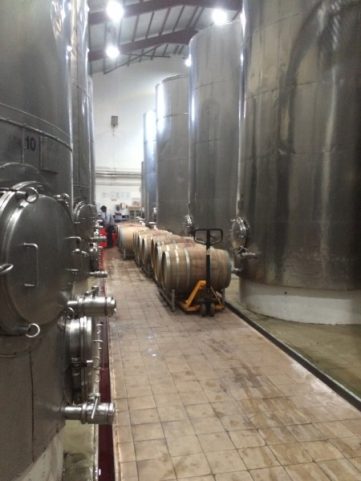 The setting is lovely, there’s a great looking restaurant on the first floor and a lovely air conditioned store with wine paraphernalia that will satisfy any oenophile.  There is, of course, also the opportunity to buy wine to take away with you.  Time and auto driver pressing, we moved on less than 2 kilometres down the road to York winery.

How to Visit York Winery Nashik

It was just a few minutes further along the road from Sula and compared to the crowds at Sula it was empty.  Literally.  We were the only ones there. 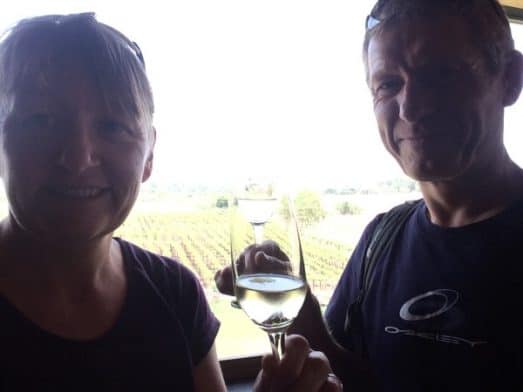 You’d be forgiven for thinking that you’re going into a factory building – it’s not as pretty as Sula until you get inside, then you get a marvellous view out over the lake to one side and inside the winery on the other. 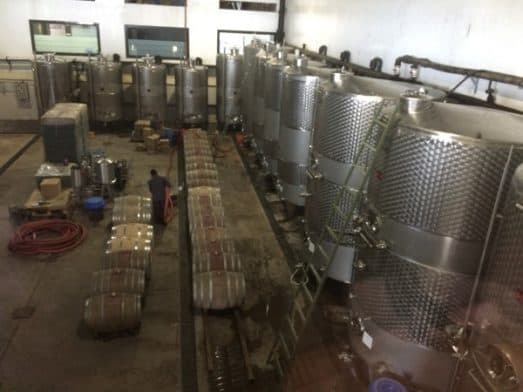 This winery is much more to our taste.  Their staff are extremely knowledgeable, and while there was no tour when we were there, the tasting was great.   We bought a bottle of the specifically numbered 2012 Arros Shiraz Cabernet to take with us and enjoyed it later in our travels.   They also provide snacks here, but we needed to move on and headed, again just a few kilometres down the road to the Soma Vine Village. 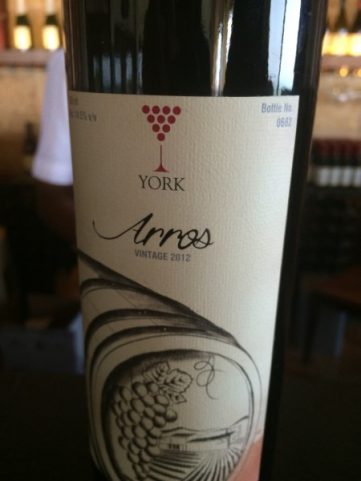 Our final stop was at Soma Vine Village.

We waited until the large group ahead of us finished and had the entire attention of the tasting guide to ourselves.  Tasting costs depend on whether you want to taste five or seven wines.  We opted for seven in order to taste the sparkling wine. 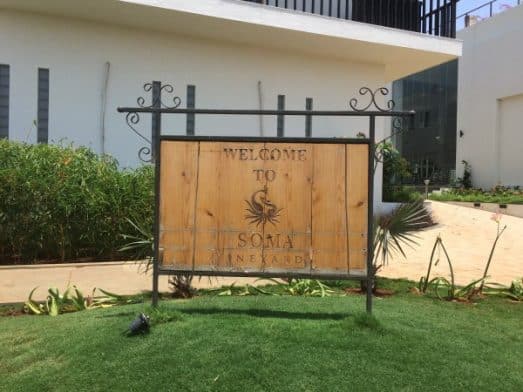 In our mini wine tasting tour, here in the Nashik area, SOMA wines were unique in their huge variety of grapes used.  The differences in wines were also massive.  They’re a young winery and it felt as though they hadn’t quite decided who or what they want to be yet.  However.  For their first year, this is fantastic wine.  The Sauvignon Blanc is similar to New Zealand Marlborough and the others are very distinctive too. 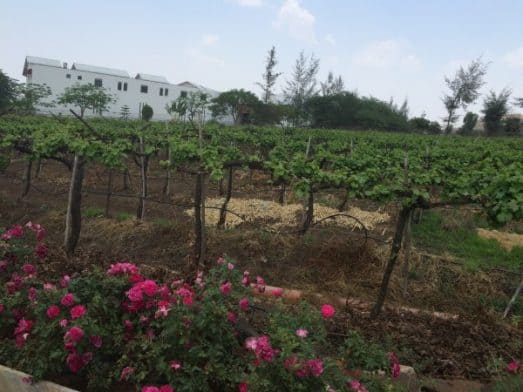 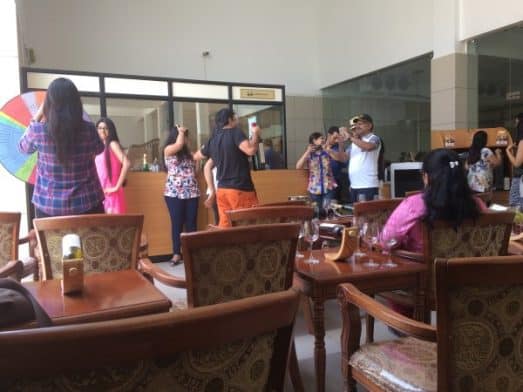 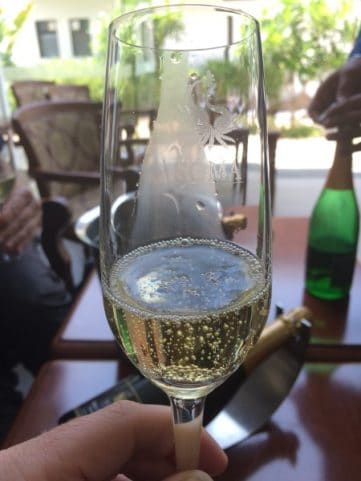 And with that we jumped back in our auto, the driver now seemingly worried that we wanted to go back and not to find more wine!  27 kilometres later we were back at the Nashik Road Railway station, next stop Mumbai.